The story of Western Maine Nurseries began in the Spring of 1917, when T. Clifford Eastman, a student at the University of Maine at Orono, acquired two acres of land from his grandmother and started planting conifer seedlings. His ambition was to supply the Maine paper companies with reforestation stock. Over the next few years, he bought more land and expanded the nursery.

In 1923, Clifford began a new venture selling evergreens direct to the consumer through mail order and Western Maine Nurseries was truly established. Clifford's acreage grew until it straddled the New Hampshire border. 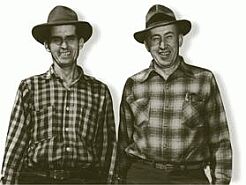 as called to duty in 1939. While serving in Europe, he was killed in action shortly before the truce in 1945. Cliff's widow sold the business to Cliff's brother, Harold and to Harry Eastman (no relation), who both had been running the business since 1938.

For the next 20 years, Harry and Harold operated a retail and wholesale mail order business and a retail garden center, which was sold in the mid-60's. The retail mail order operation was also discontinued to concentrate on the wholesale business of selling to

In the 1970's, Western Maine Nurseries expanded with new greenhouses, offering containerized stock and cold storage services. The 1980's saw the addition of a few woody ornamental plants for sale such as

The 1990's witnessed the transition of ownership from Conrad Eastman to the current owner, Rick Eastman (again, no relation!) and the major commitment to woody ornamental production. Established as a flood-proof division of the nursery, it is now well into its 4th year. While continuing its rich tradition of hardy evergreen planting stock, Western Maine Nurseries now offers over 300 varieties of woody ornamentals to the green industry.